We started off 2015 with a game jam! For Voice of Geeks Network’s VOGJam 1, the theme was “A Buggy Game.” For this, I made Skeleton Hunter, a very buggy NES-style platformer and the prequel to my Ludum Dare 25 game Skeleton’s Revenge. I made the game from scratch in HTML5 and Javascript so I could make it broken in all the right ways.

We recommend playing this game in Google Chrome for its gamepad support. 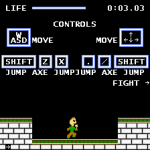 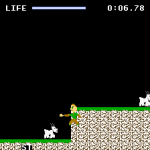 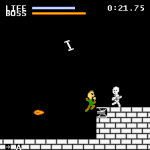 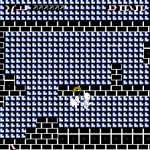 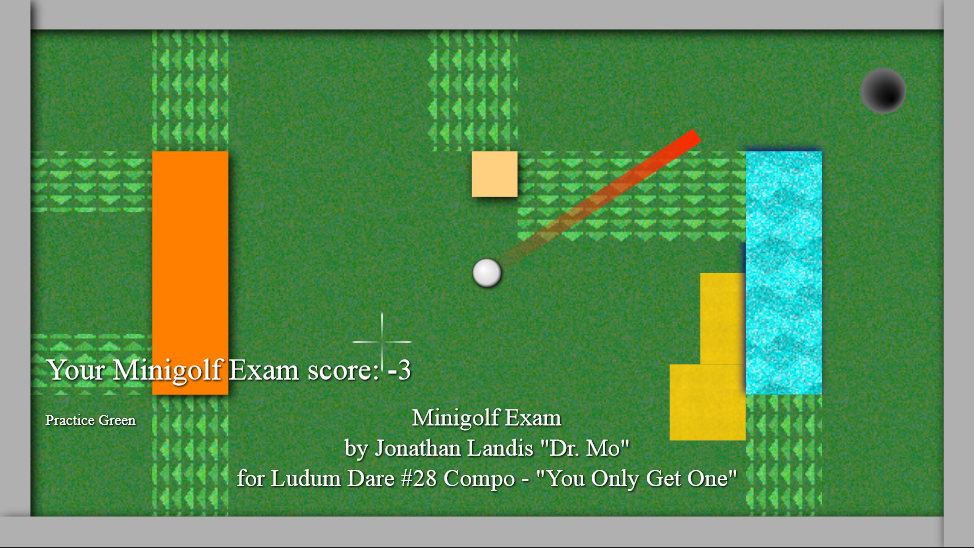 Hello, world! After a year and a half without updates, we finally have news to post here. We’ve been scouting out new development environments, but struggled to find platforms with good support for 2D games and multiple platforms. Last month, the solution came when Unity released a new set of native 2D tools. Mo³ has been hard at work learning Unity and I plan to pick it up too.

As for me, I’ve participated in three Ludum Dare compos. Ludum Dare posts a theme, and you have 48 hours to make a game about it. LD #23‘s theme was “Tiny World” so I made Asteroid Defender, a game where you drive around the surface of a small asteroid shooting at incoming bombs and repairing turrets. LD #25 had a theme “You are the Villain,” so I made Skeleton’s Revenge as a 2D platform game where you play as a common enemy type exploiting the advantages they have over common hero types. Finally, last weekend was LD #28 and the theme was “You Only Get One,” so I made Minigolf Exam, an 8-hole minigolf course where only your first attempt counts for score.

The site has received a few updates as well. We have a new Games page with links to all our completed projects, big and small, including the Ludum Dare games posted above. We now require an account to leave comments, but you can easily login with your Facebook or Google accounts on the login page or by using the “Login with…” section anywhere on the site. Finally, we have joined Facebook, and all posts on the front page will cross-post there from now on. Don’t forget to like us on Facebook or subscribe to the RSS feed to get updates on new Bakamo Studios projects! 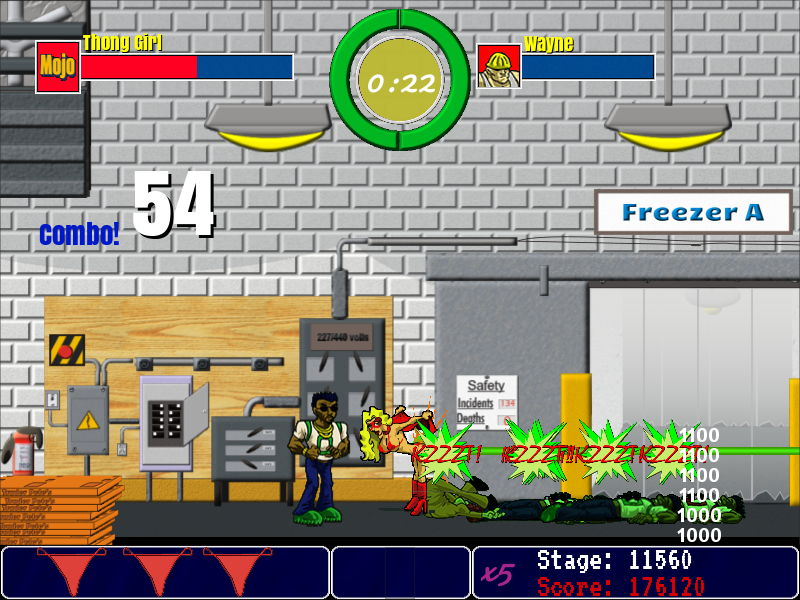 It’s been a while since we’ve said anything on the front page, right? Not to worry, since we’ll be out and about a lot more over the next couple months to bring something for everybody.

First up is A&G Ohio on March 9-11 in Mason, OH. A&G’s arcade music games are the best in Ohio, and any performance from the Protomen has us sold. At 9pm on Friday, we’ll be presenting our panel on “Creating Thong Girl the Video Game” in Panel Room 1. In this panel, we’ll be talking about our process of planning and designing the Thong Girl game and how we ignored all that when it came to production. Come and hear our advice and our warnings about getting started as a company and struggled to get our first project out the door.

Next weekend on March 16-18, we’ll be at Anime Punch Revoluticon back here in Columbus. We’ve been fans of Anime Punch’s college-aged atmosphere, and Revoluticon is all about the non-anime stuff anime fans like. Anime Punch takes their gaming very seriously. We’ll be bringing our “Creating Thong Girl the Video Game” panel here too, so keep an eye out for us on the schedule.

Mo³ and I will also be attending PAX East on April 6-8 in Boston, MA. We’re not there on official Bakamo Studios business, but it’s PAX! We can’t pass up a good chance to get in the biggest gathering of gamers on the east coast.

We’d like to give a shout out to the developers, artists, and players we met at Ohayocon and our meetings with the Central Ohio Gamedev Group. We showed off our game and got some good insight on tweaks we’re making to the upcoming Thong Girl version 1.1. Version 1.1 is complete and in testing now, so you’ll see another post here soon when it’s available. 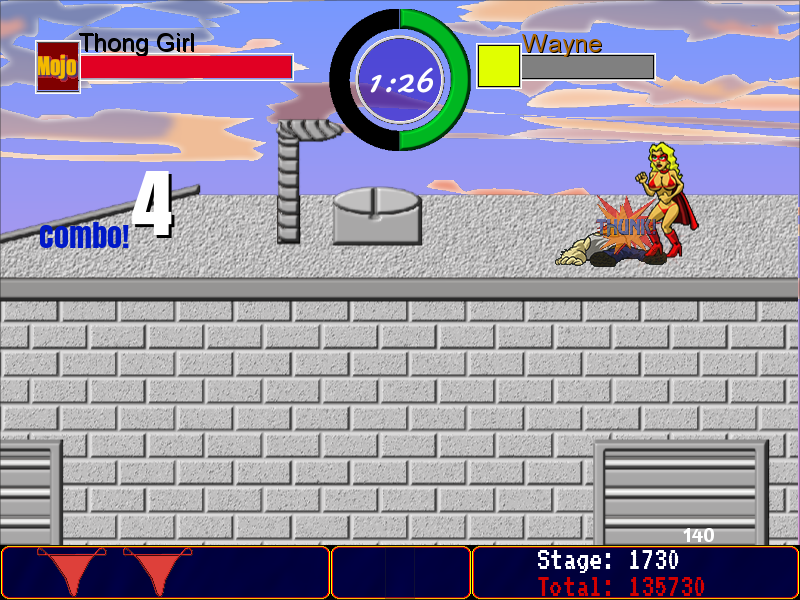 It’s been a while since the release since we’ve posted an update, but there’s been a lot going on that we’re anxious to tell you about. As many of our players already know, the fully-playable demo has three levels available, but the full version has much more to offer, including:

* 10+ levels of gameplay
* A complete story that unravels as you defeat more stages
* A vast assortment of new foes to encounter, including bosses
* Unlockable areas and bonuses.

We’re also on track to release an update to the current build of the game, absolutely free for anyone who already purchased it which will include:

The Macintosh version of the game will also be released alongside the update, so be on the lookout.

And finally, we’re announcing that the price for the game will be temporarily lowered from $5.00 to $2.50 for the month of October. Pick up a copy and tell your friends – this sale won’t last long.

After several years of development and agony, the wait is over! This is the platforming action-arcade beat-em-up you’ve been searching for. This is “that one game with the chick that fires lasers out of her butt!” This is the Adventures of Thong Girl, and the complete game for Windows is now available for $5.00. You should receive an email with the download link immediately after your purchase. Contact us if you don’t.

Our first project ever has been an amazing experience, and we think we’ve reached a major milestone as developers and as teammates, designing a full downloadable game and seeing it through to completion.

And in other news, we’ve posted a fixed version of Demo v2.1 for Mac. We sincerely apologize for the many issues we’ve had with our earlier Mac builds, and we invite you to try the fixed Mac demo and tell us what you think.

As always, check out bakamostudios.com for the latest in Thong Girl game news. If we add features or release updates, you can re-download the game for free at any time using the download links in your confirmation email. Also, Lucky Louie Productions is gearing up to release Thong Girl 4: The Body Electric on DVD, so visit thonggirlfilms.com for the history of the Thong Girl universe.

This is it – Demo Version 2.1. The last demo we’re going to release before the big launch (that we’ve missed twice.) And with that, a Macintosh version of the demo is finally available for download and perusal! It requires Mac OS X 10.4 or higher, and should work on both Intel and PowerPC processors. But seeing as this is our first attempt at building a game for a Mac, there is the possibility of errors in the installation or functionality of the game. If you run into any problems, let us know through email: contact (at) bakamostudios . com.

It looks like things are finally falling into place with distribution, so it looks like we should have the Windows version up and available for purchase within the next few days. Be sure to check back with us, as we’ll do our best to keep you updated.

But, it’s been a long haul – hopefully this is when we can call ourselves true game developers. Thanks for all your support.

I have been tasked with the unfortunate role of declaring why our game will not be available for purchase this evening, as promised.  Our release date will need to be pushed back to a “To be Determined” date in the future, due to unforeseen personal and administrative circumstances.  We understand the level of professionalism expected from a game developer, independent or otherwise, and we hope that those interested will possibly subscribe to our news feed, or check back with us in the future as we hope to have a successful launch in the coming weeks.

Thank you for your time and patience.

Its been about 4 days, now, but we’ve gotten ourselves posted on IndieDB.com, an independent game development community. We have quite a bit more marketing to do in the next few weeks and we’re trying to set up flyers around Columbus, so check out your local game stores if just so happen to be in the neighborhood.  We need enough support if we plan on lasting out there in the huge game-dev community.

On another note, we have been shooting for a August 18th release of the full version of the game, but that is starting to look unlikely. Its taking longer than we originally planned to get ourselves established as a business, and we want to have that taken care of before anyone stops in and buys our game. We’re now aiming for September 5th, so wish us luck.